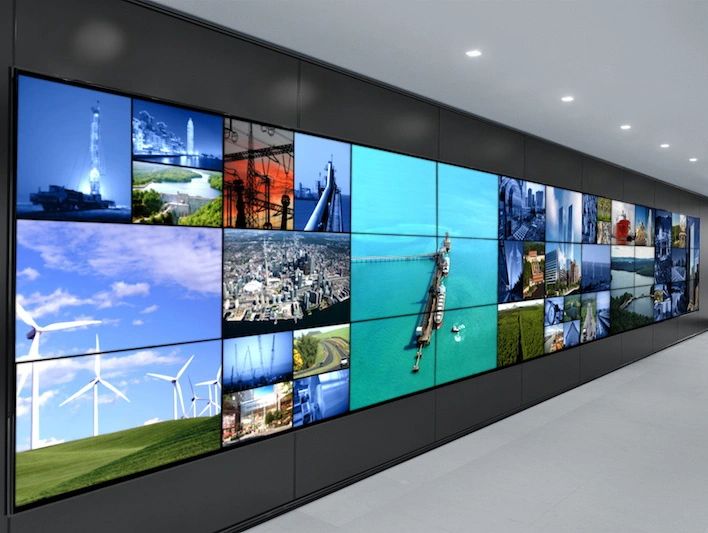 What is a video wall?

A video wall (also known as display wall) is a large visualisation surface consisting of multiple displays. Originally, they consisted of multiple televisions or monitors that were put closely together. The objective was to make it seem as one large display surface. The problem however was the large frame (or bezel) that surrounded the useful display surface of each television. This completely tore down the effect of a single canvas and ruined the visual performance. Therefore, new technologies were introduced to minimize the ‘dead pixel space’ between the different displays. Today’s display wall solutions are generally using tiled LCD panels, rear-projection cubes, or direct LED tiles.

These display walls are available in a wide range of sizes, typically with a screen diameter between 46” and 80”. The choice of the screen size depends on the typical content and the viewing distance. If watched from up close, the pixel density should be high enough to not see the individual pixels. The resolution is subject to the wall size. If for example you want a 4K video wall, you need 4 Full HD screens in a 2 x 2 setup.

Although these different technologies have very distinct merits, answering specific needs of users, they have a number of things in common. They all:

Are you tired of the dim lighting in the control room? Wouldn’t you rather open the curtains to let daylight in? You probably would, but then the operators wouldn’t be able to distinguish all of the details on the video wall. Barco comes with the solution: a video wall that delivers 2x more brightness than mainstream rear-projection video walls, but still provides great image quality and more than 11 years of uninterrupted lifetime in 24/7 mode.

Barco's family of networked visualisation video wall controllers offer the most flexible and user-friendly way to distribute and display any source onto any display.